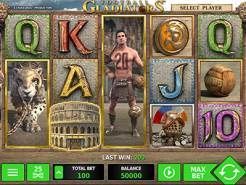 Play Now
This sounds like a cross between a regular game of football and a gladiatorial contest inside an ancient Roman arena, doesn’t it? We do get something like that here, but will the game itself give us lots of entertainment, or will it leave us feeling a bit flat? Our assessment of the theme turns out to be correct, which is a strange mix but an enjoyable one.

Format of reels and win lines

This part is familiar at least, with five reels to start spinning, so you can see how many of the 25 lines you might win prizes on.

Every line can take up to four coins per spin. You can also choose from values worth between a cent each and 50 cents each.

Special symbols to look out for

Before the game begins, you must select a player. Once you begin play, you can look for that player to appear as the wild.

There is an Arena bonus icon that may appear on the second and fourth reels of the game. If it does, you can select one of two bonuses to play. The first of these is a Battle Bonus. You must choose a monster to do battle against in the hope of winning some prizes. How much could you win here? It is worth noting the monsters represent a different level of risk, with your wins multiplied between 2x and 4x depending on the monster you select. The second bonus is called the Chariot Race Bonus. This gives you three options for playing some free games – seven, 10, or 15 free games are granted, with prizes worth 5x, 3x, or 2x their typical values accordingly. As such, there are some great elements involved here, and the mix of footballers and monsters makes for some fun and unusual entertainment in the arena!

We have never encountered a slot game quite like this one before. With some familiar footballers greeting you as you begin the game – one acts as your chosen wild, remember – this is a different way to enjoy a football-themed game. As such, those players enjoying ancient Roman slots will probably like this one too. It is an odd mix of themes but one that seems to work. Will you give it a try to see if you agree?
Play Now

Where to Play Football Gladiators Slots