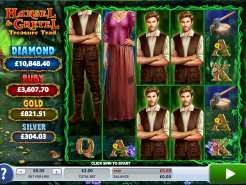 Play Now
Everyone knows the famous story from the Brothers Grimm. However, you may not know it received a movie makeover where Hansel and Gretel grew up into witch hunters. That is the theme used for this game, created by 2x2 Gaming. The game is set in the forest, with a candy cottage in the distance. There are also four progressive jackpots to the left of the reel set – a nice thing to see if ever there was one!

Combination of paylines and reels

There are eight reels in this game and 60 paylines to bet on. It looks like you get five reels, but the final set of three are split into two smaller ones apiece.

The lines are fixed, meaning you need only choose a bet per spin. This could be between 40 cents and $160.

The tempting gingerbread house is used as a wild in this slot. You might also spot a rocky path icon labeled as the bonus. This is the only thing the wild won’t replace during the game. There are six icons in the slot that are worth more than all the others. These can also usefully appear stacked on the reels. That means they’d be stacked in up to six positions on the first and second reels, while appearing in blocks of three on the remaining reels.

Can you search for bonus features in this slot game?

The scattered paths are good to find, because three or more (up to eight of them) will bring you some free games to play. The more paths you find, the more games you get, with eight, 12, 16, 20, 30, or 50 free games given to you as per the number of paths you found. Everything won in the free games is doubled from its normal value. You can also find more free spins by getting more paths in the first set.

Be sure to download and play the Hansel and Gretel Treasure Trail slot today!

If you’re wondering how to win one of those progressive jackpots, you must wait and hope you are able to trigger the selection game. This happens at random, but if you manage it, you will choose from a set of drawers. You must match three identical ones to win whatever prize is associated with that drawer. Which of the four progressive jackpots could it be? We hope you get to find out real soon.
Play Now