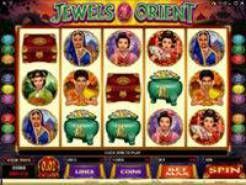 Play Now
It was perhaps only a matter of time before someone jumped on board this train. With the movie doing great business and new interest shown in this story, we now have the Murder on the Orient Express slot to try too. GameSys, the creator of the slot, is a well-known provider, so it would seem we are in good hands here. The train faces us on the title screen, but there is a hint of the snow that stops it in its tracks, too. The game was released at the end of November 2017, with five reels to spin and 25 possible win lines to bet on. There is a chance to win as many as 80,000 coins here if you are lucky, but there are many smaller prizes worth shooting for as well. If you are familiar with the original novel, you will know it features many characters. Each of these becomes a suspect in the murder that occurs on the train. As you spin the reels, you will see some of these suspects appearing. The slot game also shows weapons, clues, and a magnifying glass as a wild symbol. The train appears as a bonus symbol too, so there is a lot to watch for here. You may not be able to identify the culprit, but you’re bound to identify the best winning combinations as you play this new and exciting online slot from GameSys.
Play Now