Get Ready for Another Gold Rush 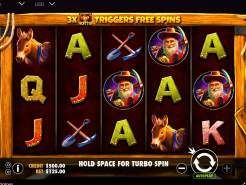 Play Now
Software developers do love the idea of a gold rush. Plenty of them have already released slot games based around this idea and/or title, and now we have yet another release to look at. Gold Rush comes from Pragmatic Play this time, and is released in mid-December. It is far from a festive slot game, but it does provide a refreshing change from that theme this month! The game looks promising, with golden lettering for the title and a cart filled with gold nuggets. The game itself seems to be set in a gold mine, with wooden posts either side of the five reels and a big wooden bar across the top. On the reels themselves, you’ll see a gold miner, a horse, an ax and shovel, and the usual letters and numbers, albeit with gold nuggets scattered around them this time. Gold Rush provides you with a few sticks of dynamite to use as a wild. This replaces many other symbols, but the scattered mine cannot be replaced by it. This mine will trigger the free spins feature if you find one on each of the second, third, and fourth reels. Meanwhile, there is a golden nugget symbol the wild won’t replace either. These nuggets appear in the free spins feature and you collect the ones you see. Each spin counts the nuggets that appear, and this determines which reel set and features are used in the next spin. With 10 free spins to begin, this could get interesting!
Play Now