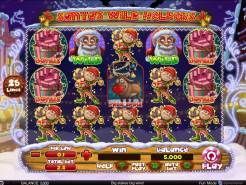 Play Now
Santa’s Wild Helpers is a Spinomenal slot game that expands far past the holiday season for enjoyment. This crazy slot game has five reels and 25 pay lines, and expanding wild, a surprising wild, and free spins too! Play with coin values starting as low as a penny and up to ten bucks per line for a top wager of $250 per spin. Santa’s Wild Helpers can be downloaded and played for real money, played in the flash version, or enjoyed in the mobile forum. The symbols used in Santa’s Wild Helpers include the help of a red nosed reindeer who might be a bit intoxicated by the look of his eyes. This is the free spins symbol, which not only trigger the free spins round but also multiplies the total bet. Get three of these and win five free spins with a 2x multiplier, get four and win ten free spins with a 5x multiplier, and if you get five then you win 15 free spins with a 10x multiplier. Santa is the wild symbol as will replace all other symbols to create more winning combinations except for the free spins symbol and the bonus symbol. When this symbol helps to complete a winning line, it can come with a multiplier as high as 8x. The bonus symbol is a gift wrapped present and it only takes three to trigger the bonus round. Other symbols used in Santa’s Wild Helpers include the elf carrying gifts, the packed stocking, the gingerbread house, the Christmas tree, the festive cottage, the bells, and the holiday decorated cookies.
Play Now