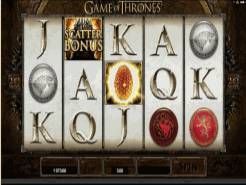 Play Now
HBO's series, Game of Thrones, has been made into new slot series similar to the others like it such as The Dark Knight Rises, Playboy, and Lara Croft: Tomb Raider and the upcoming Terminator 2 thanks to Microgaming. Game of Thrones is based off of the George R.R. Martin's best-selling book series A Song of Ice and Fire. This series is based on the civil war between a few different families that included kings and queens, knights and renegades, and noblemen, all of whom are battling to sit on the Iron Throne of Westeros. This HBO series event debuted in 2011for the first time and has since won awards that include Primetime Emmy Award nominations and a Golden Globe Award nomination for Best Television Series (Drama) in 2012. This slot game has a lengthy storyline and eight different bonus features. There are five reels and 243 ways to win.
Play Now