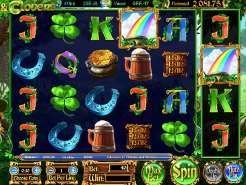 Play Now
If you want it all and then some, check out Betsoft’s new release, Charms and Clovers slots for your pot of gold at the end of the rainbow. Charms and Clovers is a 3D progressive jackpot slot game and is part of the Slots3™ tech group, exclusive to Betsoft. There are six reels and 40 pay lines, which, until now, was unheard of. You will also find free spins, scatters, wilds and multipliers. The Double Up feature is also present in this slot game so you can actually quadruple your wins by guessing the right card. Play with coin values as low as a penny up to one dollar with a max of five coins allowed per pay line. Charms and Clovers is available on the mobile forum. Symbols that appear on the reels are rainbows, four leaved clovers, leprechauns, horseshoes, Bars, pots of gold and high card symbols from Ace to Jack. The Scatter symbol is the Leprechaun and five of this symbol pays out 5000 times your wager. If wilds appear during the free spins you can win10, 000 times your bet. The wild symbol is the Clover. Being part of the Slots3™ tech group means that there are four special bonus modes of which the six reels are built around. The Golden Bonus is the symbol that shows up on the sixth reel and pays out as much as 20 times your bet. The four unique bonus rounds include the Money Wheel, the Mega Symbol, the Golden Bonus, and the Pots of Gold. Here is how they work. On the Money Wheel, which is the first bonus, the wheel will pop up on the sixth reel a new screen the ‘Special Wheel of Fortune.’ You will spin the wheel and can win multipliers up to 40 times and one of the three progressive jackpots. The Mega Symbol takes place during the free spins mode. When the 3×3 Leprechaun symbols appear on the reels, start counting gold coins. When 4 Mega Bonus symbols appear on the sixth reel you’ll win 8 free spins. If the ‘Golden Bonus’ symbol appears on the sixth reel, the Golden Bonus game is triggered. Five pots of gold appear on the reels and you will pick one to win up to 20 times your wager. Finally, the Pots of Gold bonus symbol can show up on the6th reel and triggers the free spins mode awarding 8 free spins.
Play Now

Where to Play Charms and Clovers Slots

Get Charms and Clovers Slots Bonuses