Bitcoin Theme Slot to be Released Next Month 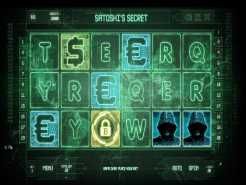 Play Now
The Czech Republic is not often featured in online slots news. However, one European based company is looking to change this. It was recently announced that the online gaming provider Endorphina has released a slots machine which is based on the theme of bitcoins.

This is being heralded as the first bitcoin-themed slot machine. Keep in mind that this is different than slot machines which accept bitcoins. Instead, the “Satoshi Secret” slots game has bitcoins as the main theme. The public was able to see a glimpse of Satoshi Secret slots at the Bitcoin Conference this month. Satoshi Secret slots is a forerunner of what to expect in the slots gaming industry. It is no surprise to see a casino with is able to accept satoshis. However, the Business Development Manager for Endorphina praised the creativity of the company by sayign this is something no one has ever done before.

Bitcoins have taken the world by storm and it is no wonder that the first slot machine featuring them as a major theme was created and launched. Bitcoin is a type of virtual currency that must be mined. Mined coins can also be exchanged among bitcoin owners. No one is completely sure who the creator of Bitcoins are, as the developer used the alias of Satoshi Nakamoto.