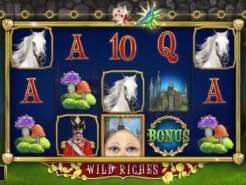 Play Now
We all know the story of Humpty Dumpty, who fell off his wall to an uncertain fate. The scene is set when the game loads to reveal Humpty sitting on his own title, and a castle in the background. Are all the King’s horses inside there, we wonder? Let’s see whether Humpty can hold himself together long enough to bring you some prizes, or whether he’ll be just as accident-prone as we expect!

Combination of paylines and reels

This is a cool game with five reels and 30 win lines in play.

A cent bet per line means a minimum bet of 30 cents per spin. The biggest total bet is $30.

There is no major shock to find Humpty Dumpty himself as a wild symbol. However, he is rather useful and unusual. If he appears over the whole of the third reel, he breaks into bits and turns reel four entirely wild as well. You might also see single wilds on the second and fifth reels before this feature is over, and only then are your wins awarded. Cool! You might also see a golden wreath with a cracked blue middle. This is handily labeled as the bonus icon, and it will bring you a choice of bonuses too. More about that below.

Can you search for bonus features in this slot game?

If you get a bonus icon on the second, third, and fourth reels, you’ll be able to choose one of two free spins features. The first brings you eight free spins on a set of six reels. Freezing wilds appear on the third and fourth reels here. You will also see a track above the reels, and Humpty appears at one end with Dumpty on the other. Yes, there are two in this instance. Every time a scatter appears on the second or fifth reels, they get closer together. Meeting in the middle means you get another two free spins. The other option is to pick 10 free spins in which the scatter trigger for Humpty and Dumpty is still present. Three additional spins are awarded when they meet here. Five reels are in play instead of six, but you can get the Humpty Dumpty wild in play.

Be sure to download and play the Humpty Dumpty Wild Riches slot today!

Will Humpty help you win prizes? We guess he will, and you might just want him to break into pieces to help you do it…
Play Now