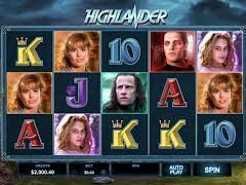 Play Now
Highlander is a classic movie that is a fan favorite and has become a true cult hit. While the original was first released in 1986, there have also been several movies following in the series. Microgaming has recently signed a licensing agreement to use the original movie to design a new slot that is set to go live on December 6, 2017. Players can expect to see the main characters from the moving including Christopher Lambert as the Highlander (Connor MacLeod) as well as Clancy Brown as The Kurgan. Roxanne Hart as Brenda Wyatt will also be featured on the reels which will include classic symbols from the movie. According to game developers, this will be a 5 reel, 243 ways game that will be true to the movie in design and style. The game will be based in the Scottish Highlands as well as in New York, with a terrific soundtrack and amazing graphics and artwork.
Play Now