Iron Assassins Slots: Out of This World 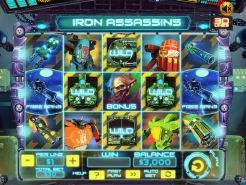 Play Now
Iron Assassins Slots is a five reel and 30 pay line 3D video slot game . With a title like this one it might be difficult to determine what this slot game’s theme might be but the theme here is outer space with a distinct flavor of 2001: A Space Odyssey and Star Trek. You will join a league of assassins and protect what is yours from the aliens. Iron Assassins Slots was developed by Spinomenal, which is a newer developer with a track record of innovation, style and reliability. Iron Assassins Slots can be played on mobiles, tablets and computers. Added features in this high octane slot game include a chain wild generator, a wild multiplier, multi targets, a moving target, a FPS bonus game, and sticky wilds. Play with coin values of a penny up to ten dollars per line. In the Moving Target’ zone, your multiplier counter will double up and the more targets you hit while the reels are in motion, the heavier bounty you will be taking home when you land. The ‘Moving Target’ multiplier can really increase your winnings by allowing the wild symbol to manipulate the regular symbols and arrange them in combinations that actually pay out. Spinomenal developers have been known for dubbing the scatter symbols as free spins symbols, just so you know, but regardless of what you call them they do unlock free spins consistently for you and can generate even more free spins. The FPS Bonus symbol can trigger a variety of bonuses. Some may be of a gamble nature and some might require a bit of skill but both allow you to put your base game winnings at stake.
Play Now

Where to Play Iron Assassins Slots